Last month I wrote about a high-tech school visit I’d made to Sydenham School in South London. Today I’m delighted to announce the results of the creative writing competition.  The theme was ‘invasion’, and the winning entry was by Jess Taylor in Year 8, who set her story – the opening chapter of a novel – in Poland, soon  after it had been invaded by first German and then Soviet forces.  It’s atmospheric, dramatic, and definitely leaves you wanting to know what happens next.

Many congratulations to Jess and good luck with writing the rest of the novel!

Five days before Poland is conquered.

Where are the others? They aren’t here. I ran alone. They ran, but where? Where are Krystyn and Wira? Where are the boys? Where is Erek? He was supposed to keep us together. It looks like he failed at that.

I’m still running, but slower now. I’m tired, though I’ve gone much further then I would have before the invasion started. If the invasion has given me one good thing it has been my stamina, my wariness, my heightened senses. Now I trust no one without reason; I think of myself before others; my instincts protect me and me only. I suppose some people might call me dangerous… I was never dangerous before.

These days I am cold and hard steel, because the war has left me with nothing else to be.

Where is the group? It’s strange for me to have not even spotted one of them yet.  The group used to be everywhere. It was annoying sometimes, their tendency to have an eye in every crowd and an ear in every wall, but it was how we managed to survive. At the moment I kind of wish that there as an eye watching me, because at least then I’d know that there was someone else alive, someone out there. Unfortunately I suspect they are dead back there, but somehow I don’t want to believe it.

We were moving slowly, together, in a pack. The night before had been a hard one, stressful. No bombs, but plenty of gunfire. Plenty of bodies.

We had been wondering about the lack of explosions, hoping that the Germans had finally discovered mercy, or even better, run out of projectiles. No-one anticipated the attack. No-one even thought that there would be one. There was nothing that we could do when the sky started to rain fire. 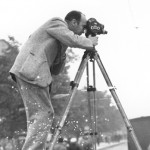 taken by Julien Bryan (pictured right, filming the ground-breaking documentary Siege).  Find out more about the photographer and see more of his extraordinary images of the invasion of Poland on the Holocaust Encyclopedia of the United States Holocaust Memorial Museum.

Observe yourself »
« Diving deeper: into the ‘Glass Room’