80th anniversary commemorations and conferences have been taking place up and down this country as well as Spain to mark the Spanish Civil War, initiated by a right-wing military coup in July 1936, followed by Franco’s long dictatorship.  It’s a measure of just how involved Britain was in the conflict which many see as a rehearsal for World War Two.  Giving a paper myself about the evolution of my YA novel A World Between Us at the fascinating ‘Spanish Civil War in World Literature’ conference at London’s School of Advanced Studies, I mentioned the iBook edition which was put together in 2012 with the generous help of vast numbers of archives and libraries in the UK and US (thanks here). The image above of a young female anti-fascist donating blood to be sent to the front lines for wounded Republican soldiers was provided by the London School of Economics. The iBook also features specially recorded interviews with leading historians Paul Preston and Richard Baxell and a rare and cherished contribution from the last International Brigader alive in Britain at the time, David Lomon, whose path to Spain was remarkably similar to that of my young Jewish hero, Nat. “It’s like a whole Digital Humanities project,” was the response of some Canadian academics when I showed it off. 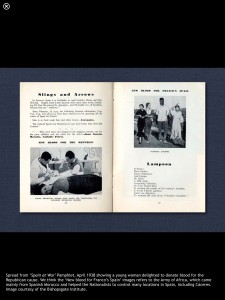 Maybe not quite that grand or ambitious…but I’m still immensely proud of what Hot Key Books achieved with the iBook: text and extra features combine to give a clear, accessible and moving introduction to the war for all ages that costs no more than a paperback. This edition is illuminating on the role of journalists and medics as well as military volunteers.  I can’t think of any equivalent. To be honest, I’m also still rather sad that all the confusion between ebooks, iBooks, epubs, apps, Kindles, Kobos, tablets etc etc etc – even worse three and half years ago than it is today – meant that the ‘multitouch’ A World Between Us suffered from considerable marketing difficulties . It was just so hard to explain what it was! But now remote jobs made it easy. 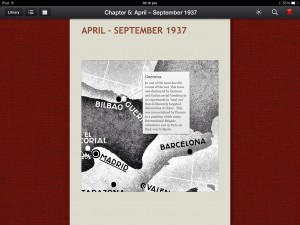 But we have moved on in both understanding and technology – a little – and the iBook with music, photographs, original letters, cartoons, posters, pamphlets, propaganda and interactive maps, all once only accessible on an iPad, can now be downloaded for use on any up-to-date Apple platform. You can get a good sense of it here, and buy it here on iTunes. So it’s not too late.  Take up of both history and Spanish in schools is very much on the rise. Can you understand Spanish culture without knowing something of the war and its long shadow? Let me know what you think. Sales pitch over.

Almost. If you’re in London on the afternoon of October 1st, please join me and Michael Rosen at Rich Mix for a special family event commissioned by Philosophy Football as part ofThe Signal Was Spain.  Advance booking essential.

Poems inspired by GUERNICA, 1937 »
« The Red Virgin and the Vision of Utopia: book review