iBook update and other news… 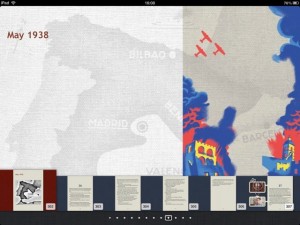 A quick round-up this week…

Everything is coming together on the multi-touch iBook edition of A World Between Us and it’s looking simply amazing… I’ve certainly been amazed every time Amy Orringer (Digital Co-ordinator at Hot Key Books) has sent me the latest version, with more pages and ‘assets’ to check through and approve.

It’s quite hard to picture until you see it in action. I’m not even sure how best to describe the screenshots you can see here – I feel there’s a technical description that’s escaping me.  They both show just one of the ways you can find your way around the book.  Running along the bottom of the screen are the pages. 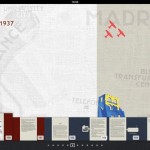 Above you can see one of the maps which prefaces each section, showing how Franco’s forces are advancing through Spain. There are interactive labels for the most important places for that part of the book giving you more information.  A few pages along here, for example, and you can see a photograph of a Mills bomb and watch an interview with historian Richard Baxell.

Elsewhere you might listen to a particular song a character is singing at a particular point of the book, see exactly what an International Brigader’s passbook looks like just as Nat receives his, or hear an International Brigade veteran explaining why, just like Nat in A World Between Us, he was moved to leave the East End of London and set off to fight fascism in Spain. I’ve been particularly excited by Molly Murphy’s letters from Spain, which reflect so closely Felix’s experiences of writing and receiving letters during the war. And the archive photographs of blood transfusions.  And the posters, in exactly the right colours. And the newsreels, which are so moving. And too many other things to mention, and that I can’t show you for copyright reasons.

I’m hugely looking forward to hearing what people think of it when it becomes available in the iBookstore later this month. Meanwhile (when they can get the iPad back from me) my children have been thoroughly enjoying exploring Hot Key’s other multi-touch iBook, Sally Gardner’s brilliant Maggot Moon.  They navigate it with all the instinct I seem to lack, and particularly love the note-making feature. (Notes can be emailed to the author or anyone else you want to share your ideas with.) 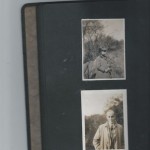 Making the iBook has given me a glorious excuse to spend hours leafing through family photograph albums. My grandfather was the photographer of the family, which meant that pictures of him are far and few between. For months, all we could locate was an extremely severe portrait of Jack Gaster from the 1950s. But in the nick of time, I found a couple of much more relaxed shots from the early 1940s – they were tiny, but Amy managed to scan them beautifully – and now they’re safely in the Family Photograph Gallery of the 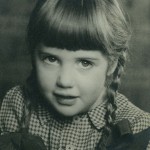 iAppendix along with, among others, a particularly lovely one of my mother as a young child taken by the Austrian communist photographer Edith Tudor Hart, whose husband Alex Tudor Hart played such an important role in the British Medical Aid Unit during the Spanish Civil War.

I’ve been doing more delving into family history for an article due to appear in the next edition of the magazine Jewish Socialist.  A great pleasure was reading my great-uncle Theodor’s descriptions of the family home in Maida Vale, where ‘Clamor vincit omnia‘ (‘Uproar conquers all’) was inscribed above the nursery mantelpiece. Moses Gaster’s house had ‘an endless array of books, overflowing into every room, and [an] equally endless stream of visitors, men and women of all vocations and types and from all parts of the world who poured into it daily.’  One day in his teens, Theodor extricated ‘several leaves of a fourteenth-century manuscript of Euripides from the binding of an old Turkish prayer book’.  He remembered trying to master the argot of Parisian gypsies from a tattered paperback which, ‘so to speak, rubbed shoulders on the shelf with an equally intriguing and outspoken Index Eroticus in which a former owner had helpfully penciled the English equivalents’, and digging out an ancient roll of leather from the dining room cupboard, ‘inscribed with a portion of Deuteronomy in characters very like those of the Dead Sea Scrolls.’ (Theodor Gaster grew up to become an expert in the Dead Sea Scrolls.)

I’ve also been busy with various interviews, guest blogs and short features which will be coming up on Red House Books and The Overflowing Library, in Newbooks (the Magazine for Readers and Reading Groups), Writers’ Forum and The Independent in the next few weeks and months.  And little by little, this website is growing.  ‘Other stuff’ is proving a commodious section – with new pages on Spanish Civil War music and my local independent booksellers.  And…I nearly forgot…if you read my earlier Longing for Lundy post and were wondering if that relief map is sill there, last weekend I went back to that lovely Mill in Somerset to see my cousin, and there it was in the kitchen, quite unchanged, exerting the same old magic…. 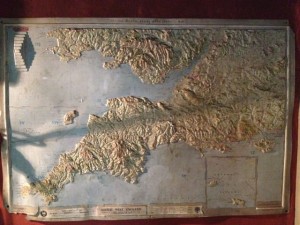 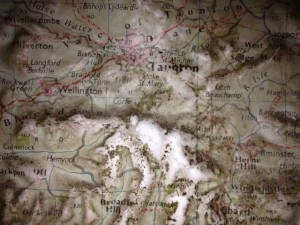