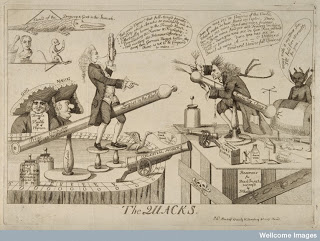 “Syson’s enthralling book offers a new portrait of Graham as an authentic innovator… [An] admirable and engaging book.” – The Guardian

“I was entranced by Lydia Syson’s superb volume…Syson combines a sure grasp of intellectual history with enough awareness of just how much fun her story is. More than that, it shows how the failures and eccentrics of history are often the most intriguing subjects.” – Scotland on Sunday

“Lydia Syson investigates the life of this most progressive of quacks in an engaging dash around the credulous and curious world of Enlightenment medicine…This meticulous reconstruction of his journey from obscure apothecary to London society darling is a vibrant portrait of a surprisingly modern world… Her discussion of Graham’s methods and influences is exhaustive and often illuminating… Doctor of Love is revealing and funny about early attempts to make a science of sex.” – Times Literary Supplement

“Lydia Syson enterprisingly and entertainingly explores the fringes of eighteenth-century science…to give us a brilliant biography of the Scottish apothecary-physician-sexologist-nutritionist-showman Dr James Graham (1745-94).” Women: A Cultural Review

“In her canny and erudite new book, Lydia Syson presents Graham as the first sex therapist, showman and entrepreneur. She navigates a tightrope between Graham as huckster and Graham as physician, and in the process raises important questions for the history of medicine.” – Journal of Medical History

“Wordsworth gave us the egotistic sublime, and Graham the sexual sublime; Lydia Syson has given us a highly enjoyable peep from behind the partition at one of the eighteenth century’s weirdest and most wonderful figures.” – Literary Review

“Syson’s delightful book will engross readers with its marvellous racy material, delivered with the perfect mixture of contextual understanding and fluid, sprightly wit.” – The Lancet

“Superlatives soar off the page in this enjoyable account of Dr. James Graham’s professional life over the course of his career spanning the 1760s to ’90s. Graham was the purveyor of “cutting-edge” medical treatments, most notably electrical therapy, supplemented by magnetism, ether and nitrous oxide, music, and scent. Lydia Syson tackles his relatively short, frequently itinerant, life with wit and intelligence.” – Journal of Historical Biography

“A valuable contribution to the study of sexuality, medicine, and eccentricity in the late eighteenth century. Doctor of Love is, after all, the only book-length biography of Graham; it is, moreover, a very entertaining account of a fascinating eccentric.” – Eighteenth-Century Studies

“fascinating account of the scientific maverick…Syson convincingly assesses the doctor as a perfect example of those Enlightenment figures who challenged religious and social orthodoxies.” Gallimaufry – Scottish Review of Books

THAT BURNING SUMMER reviews »
« Coming up…