So a royal funeral could soon be on the cards.  I imagine the protocol might get a little tricky, what with it being the second time for this corpse.  And there’s nobody left alive who knew him.

I’ve just been thoroughly distracted from my afternoon’s work by some breaking news: archaeologists in Leicester may have found the actual body of Richard III.  Of course, they’re being cautious about their announcements.  Nothing can be conclusive until the skeleton has been rigorously analysed.  Incredibly, it can even be DNA tested – a 17th generation descendent of the King’s sister has been located in Canada for this very purpose.  But it’s definitely an adult male with a severe spinal abnormalities – not quite a hunchback, but one shoulder significantly higher than the other – and it has a major skull injury as well as a barbed iron arrowhead stuck between its vertebrae.

As luck would have it, I visited the Bosworth 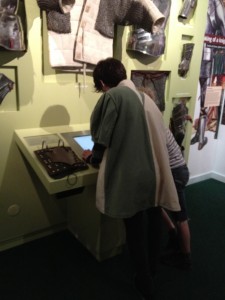 Battlefield Centre just last weekend.  Eager for news about the dig, I learned that queues for the Leicester carpark archaeological site were already round the block.  I wondered if all that local enthusiasm hadn’t partly been generated by the brilliance of the exhibition we were at.  Three generations of my family were held enthralled, unable to tear ourselves away into the sunshine of the last decent weekend of the summer.

Lots of stories to be told here of course.  Some of our party still had Mark Rylance’s recent rendition of Richard III at the Globe theatre still ringing in our ears – as neck-craning groundlings leaning against the stage, we’d been utterly immersed in his wickedness.  Quite a few of the characters from the history play made appearances at the Bosworth exhibition, which doesn’t actually address the character of the king, nor Shakespeare’s interpretation of it. 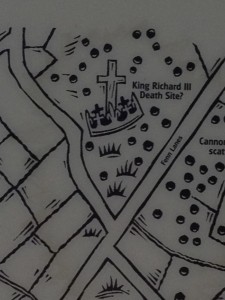 Instead the focus is on less familiar stories from the time: the Duke who changed his mind, a barber-surgeon carrying out frontline operations, a French mercenary’s wife.  We watched cleverly produced animations of the battle’s movements, wondered how different weapons might withstand a charge of destriers, tried on costumes (incredibly heavy), tried out metal detectors and admired real treasure – a tiny silver boar badge, dropped in the mud over five hundred years ago by a 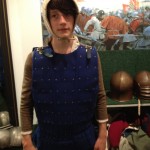 knight who’d fought alongside Richard III.  It had probably been struck off during hand-to-hand fighting, and less than two years ago became a clinching piece of evidence for the real location of the battlefield – the subject of a long-running scholarly battle.

I left clutching a copy of a book I hadn’t read since I was a teenager…not a history book, but a novel by Josephine Tey called The Daughter of Time, the story of a bedridden police detective who tried to clear the (maligned?) king of foul play against the Princes in the Tower.

BOOKING SCHOOL VISITS and other events »
« And another thing