I spent yesterday filming for the iBook edition of A World Between Us.  So I’m spending today with all the things I should have said yesterday swirling round my head.  Too late.  Did I really fail to mention the time my great-aunt Lulu was arrested after throwing a brick through the German Embassy’s window?  Perhaps I actually meant ‘wealth gap’ when I talked about the ‘poverty gap’ in the 1930s?  And how could I have forgotten the Hunger Marches that drew so many young people into politics and activism during the Depression?  All those omissions, for just one question.

Another time.  Though I suspect I’ll be kicking myself just as hard next week after the Spanish Civil War event I’m taking part in at Blenheim Palace.  It’s about the relationship between fact and fiction, and so couldn’t be more relevant to the Hot Key iBook.  Do come if you can – and if you can’t, you might be interested to know that both the other participants, leading historians Paul Preston and Richard Baxell, will also be contibuting to the A World Between Us iBook. 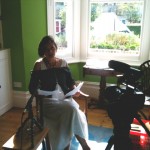 While I was deep in the throes of writing of the novel, I used to wonder if future readers might be led in all kinds of new directions, as I had been – listening to music they might not otherwise have encountered, seeking out the propaganda posters that make such an impression on the characters in the book and discovering more about the lives and motivations of some of the people who left the British Isles and went to support the Republican cause in Spain.

I could hardly believe my luck when Hot Key came up with the idea of an enhanced iBook edition.  What could be more perfect?  All that extra stuff, instantly accessible, and plenty of inspiration of where to go to find out more into the bargain.

Putting together this material is now well under way and I’m longing to see the finished result.  Judging the balance between historical accuracy and narrative drive is the great challenge of writing a novel like this, and getting it right in the iBook edition is just as important.  You can never fit everything in.  And, tempting though it often in, the last thing we want to do is swamp readers with information.

There are good reasons to write a story rather than a history book.  But I suspect that the real joy of an interactive, digital version like this is that the choice of when and how far to explore a thought further is up to each individual.  Which seems highly appropriate considering A World Between Us is a book all about making choices, and how far to take them.