On these particular visits, we spent time together looking at the various different sources that fed into the writing ofThat Burning Summer - family stories and obsessions, a familiar landscape, maps, artefacts in local museums, and above all WW2 propaganda material.  Particularly important to this novel was a 1940 leaflet called If the Invader Comes, which, through an alarming set of ‘rules’, told citizens how they should behave if the country was invaded. I wanted to inspire students to think creatively about the relationship between history and fiction, research and the imagination.  We considered a question all story-writers constantly ask themselves – ‘What if?’  - and also why writers of historical fiction have to be particularly alert to another: ‘Where are we in time and space?’* 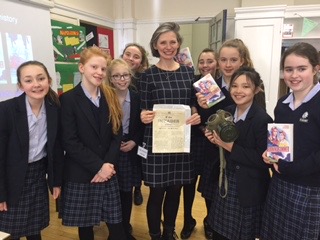 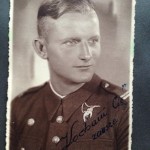 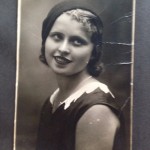 - I’ve been able to update my blog post on the history of the Polish pilots in the Battle of Britain with some wonderful photographs of the vanished pilot Stanisław Duszyński and his wartime fiancé, Czesława.  Many thanks to her granddaughter for getting in touch.

- Last weekend I visited an exhibition now on at the Islington Museum called ‘Banners for Spain‘ (in collaboration with the Marx Memorial Library), which tells the story of Islington’s involvement in the Spanish Civil War and illustrates the reach of the Aid Spain movement.  Catch it if you possibly can before July 8th. Full details and related events, including guided walks, here. 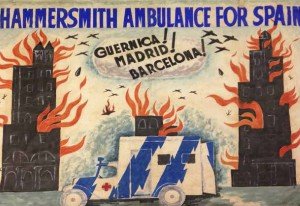 - My Paris Commune novel, Liberty’s Fire, has recently been picked out in two different round-ups. In Books for Keeps it’s among Ten of the Best Novels to Introduce Children to Politics‘ while the US Barnes and Noble teen blog selected it as one of 5 YA Books for Sarah Waters fans: ‘Even if you know nothing about the Commune of Paris or the Franco-Prussian War (before reading this, I certainly didn’t), Lydia Syson’s incredible worldbuilding will have you feeling as if you’re right there with them—running through the streets and crying revolution while Paris is burning.’

- Don’t forget the first ever National Writing Day takes place this month on June 21st.  I’ll be taking part through CWISL’s schools writing festival, Shoutsouth! at London’s South Bank university, June 19-20th. This video for our sister festival, Shoutwest!, will give you a good feel for what we’re planning.