Talking about the Spanish Civil War 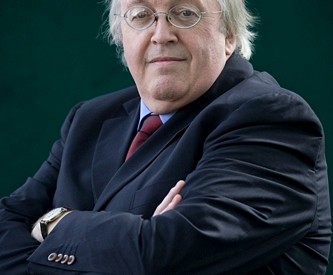 Paul Preston must know more about the history of twentieth-century Spain than anyone else alive.  A captivating speaker, who charms with his truculence, he’s a hero to thousands, including me.

The first time I heard him in public I squeezed into the last seat of a dark and crowded basement at the Instituto Cervantes just as he began to introduce his fellow speaker, Julián Casanova.  The event was called  ‘Remembering the Spanish Civil War’. I gulped, concentrated hard, and wondered, not for the first time, if I hadn’t bitten off more than I could chew. It hadn’t even occurred to me that it would all be in Spanish.

I thought about all the international volunteers who arrived in Spain with even less Spanish than I had, and perservered, hoping I really was getting the gist of it…then I noticed a few people with headphones, and I realised with relief that there was a simultaneous translation available. 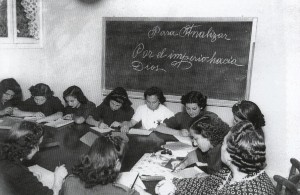 The discussion was fascinating and unforgettable.  Members of the audience – people of my age – talked about their school history lessons in Spain during the Franco era. Throughout the dictatorship, only one version of events could be told – a fiction. The Republican perspective on the war and its aftermath was brutally suppressed.

The truism that history is written by the victors is often attributed to Churchill.  As I listened in 2010 to Paul Preston, Julian Casanova and others talking about how ordinary people experience the reality of this, and its lasting and damaging effects, I hardly imagined that two years later I’d be sharing a platform with Paul in Blenheim Palace, Churchill’s birthplace.  We were there yesterday – many thanks to the Woodstock Literary Festival – to talk about fact and fiction in the Spanish Civil War alongside Richard Baxell, the leading historian of the British Battalion in the International Brigades (his gripping new book is called Unlikely Warriors) and cultural historian and former filmmaker Christopher Cook. I must say it felt a great honour. I was amazed when Paul Preston told us how nearly he’d missed working on Spain, because he’d never considered himself a linguist.

His latest book The Spanish Holocaust, a gruelling read, documents the behind-the-lines atrocities committed during the Spanish Civil War on both sides. It sets out with great clarity the ideological drive behind the Nationalists’ actions but pays equal attention to Republican violence, analysing cause and scale in both cases. (As Timothy Snyder, author of Bloodlands observes, this is a book which invites reconsiderations of the European twentieth century as a whole.) Preston brings together recent work carried out all over Spain, both by academics such as Casanova and local historians like the garage owner whose work started with his efforts to find the burial places of his own family.

There is a great sense of shared endeavour in all this. It’s one of the things that I most value about working on the Spanish Civil War – the idea of a common cause. It’s not about a commitment to an ideological line, but a commitment to sharing and spreading ideas and information – and individuals’ stories. 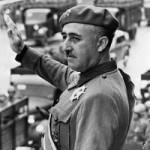 Yesterday Paul described how he’d become sucked into the subject as an undergraduate when he discovered an area of history that really offered everything: big characters (Franco, Hitler, Stalin, Mussolini), politics, religion, drama, emotion, heroism, tragedy – never mind good and evil, whatever your doubts about the use of those words. When he worked on We Saw Spain Die, his book about foreign correspondents covering the war, he said he found himself utterly identifying with journalists who arrived as dispassionate observers but could hardly remain so. (If you’ve read A World Between Us, you’ll recognise George here.)  Richard Baxell became hooked on Spain and the International Brigades after reading Hemingway’s novel For Whom the Bell Tolls. I couldn’t help noticing that his new book is dedicated to Robert and Maria – Hemingway’s romantic leads, I presume? I wish we’d been able to ask Christopher Cook what led him to produce the BBC documentary he made in 1986 with a group of British Brigaders, including Bill Alexander and Miles Tomalin, when they returned to the Spanish battlefields for the first time since the war.

The key thing is that all these different stories are told.  It’s one way to help make it possible to live in a world where all stories can be told.