My kitchen is heady with the scent of cloves and ginger and muscavado and cinnamon.  The biscuity part of our gingerbread house is ready to be stuck together with icing, and adorned with sweets. We will eat it on New Year’s eve.  Having managed to burn a few trayfuls during supper last night, we’ve still got more hearts and stars and snowflakes for presents and tree-hanging and emergency fuel to cut out and bake, and also, this year, pigs. 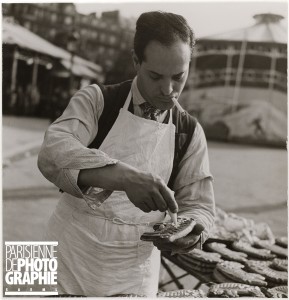 In Liberty’s Fire, Anatole meets Zèphyrine at the Foire du Trône, and their love is kindled on the swingboats, while the iced gingerbread pig he has bought her nestles uneaten in her lap. The scene came to me as soon as I read about the gingerbread fair.  Despite the fighting raging outside Paris, the show went on, and the fair can be seen a celebratory moment of defiance, the perfect illustration of the carnivalesque element of the Commune, ‘le temps de cerises’.

The Foire du Trône is still held in Paris each May, still in the 12th arrondissement, although now it’s now a gigantic funfair, and lovers are swung against each other in stomach-emptying rides like ‘Le Star Flyer’.  But you can still buy gingerbread pigs. 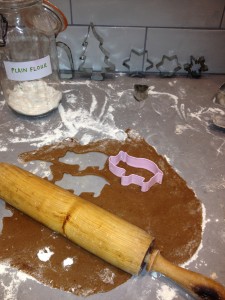 I made hundreds of pigs last May for various Liberty’s Fire events. I must confess I’ve not tried another recipe for gingerbread, but since Prue Leith’s one hasn’t let me down in nearly two decades, so I’ll share my version of it with you now.  It’s got just the right amount of kick and snap, and the biscuits last for ages without going soggy.  Doubling the quantities will give you enough for a house and plenty of biscuits. I usually triple them, because the mixture also freezes well and it’s always good to have an emergency batch.  Make holes with skewers before biscuits harden if you want to hang them up, and don’t be tempted to mix the dough with a machine as it needs more delicate treatment.

2. Melt the butter in a saucepan, add the sugars, mix well and allow to cool before adding the eggs.

3. While the butter is cooling, sift the flour, baking powder, salt and spices into a large bowl.

4. Make a well in the dry ingredients and gradually add the butter and sugar mixture.  Put in the fridge until completely cold and much stiffer.

5. Divide into manageable lumps, roll out and cut out with your favourite cutters, and put on lined baking sheets. If you’re doing a lot, put one tray in the fridge while you’re doing the next.

6. Bake for about 10 minutes but keep a close eye on them! 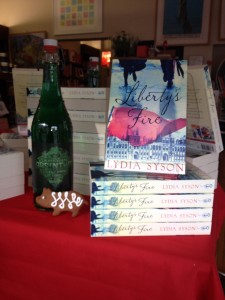 You can find more photographs of the Gingerbread Fair, and of course the Paris Commune, and much more at Paris en Images.  This website offers free access to 110,000 photos from the Roger-Viollet archive as well as the collections of the Paris Historical Library, the City Hall Library, Forney graphic arts Library, Musee Carnavalet and the collection of photographer Pierre Jahan, among others.

Other news…I’ve written about the almost-Impressionist artist Bazille, his intriguing portrait of Renoir and the ‘invention’ of homosexuality at The History Girls this month.  And I felt Christmas had come early when I read this fabulous review of Liberty’s Fire in Armadillo, the children’s book review magazine.