‘Deberemos resistir! We must resist!’

I don’t know if you remember the moment in A World Between Us when George, walking along a street in besieged Madrid, finds himself humming along to ‘Ay Carmela’, one of the best known Republican songs of the Spanish Civil War. Well, now’s the time to join in too – if not with the song, then with the sentiment.

The sole monument to the International Brigades in Madrid 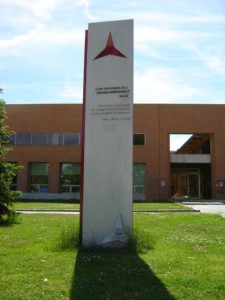 was put up less than two years ago, and already it’s under threat. For the time being at least, you’ll find it at University City, once a frontline in the fighting (David Lomon gave a speech at the monument’s inauguration). Before long, it had been vandalised, with graffiti calling the volunteers ‘murderers’.  Earlier this month, judges in Spain ruled that it was in breach of planning regulations, and ordered the University to take it down.

Newsnight’s economics editor Paul Mason wrote last year of the recent resurgence of the far right in Spain.  ‘Austerity’ has become an easy excuse to suppress vitally important historical memory projects that have only become possible in the past decade or so.

David Mathieson set out the background to the attack on the International Brigade monument in an excellent ‘Comment is Free’ piece in The Guardian a few weeks ago: despite the ‘scores of streets and squares in Madrid that still bear the names of members of the Franco regime, let alone monuments such as the Arco de la Victoria that celebrate the crushing of one half of the population, it now seems that political spite will do away with the only commemorative plaque to the International Brigades in the entire city.’

There are four things you can do to show international solidarity with the defenders of the memory of the international anti-fascist volunteers, 10,000 of whom gave their lives to the cause:

–  Sign this petition (It’s in Spanish, but see below for a rough translation – courtesy of Google Translate I’m afraid)

–  Ask your MP (if s/he isn’t a minister or shadow minister) to support the Early Day Motion 204 calling on the British government to make representations to the Spanish government about the threat to the Madrid memorial.

– Tell as many people as you can about the issue, and encourage them to do the same.

– Visit London’s own IB memorial at the South Bank, and join in with the IBMT’s annual commemoration in London on July 6th…see below for full details.

You can find more information on the International Brigade Memorial Trust blog and also in The Volunteer (the journal of the Abraham Lincoln Brigade Archives), read a report on a recent demonstration at the memorial in Madrid on the website of the Associación de Amigos de las Brigradas Internacionales, and explore this map of other IB memorials around Spain. 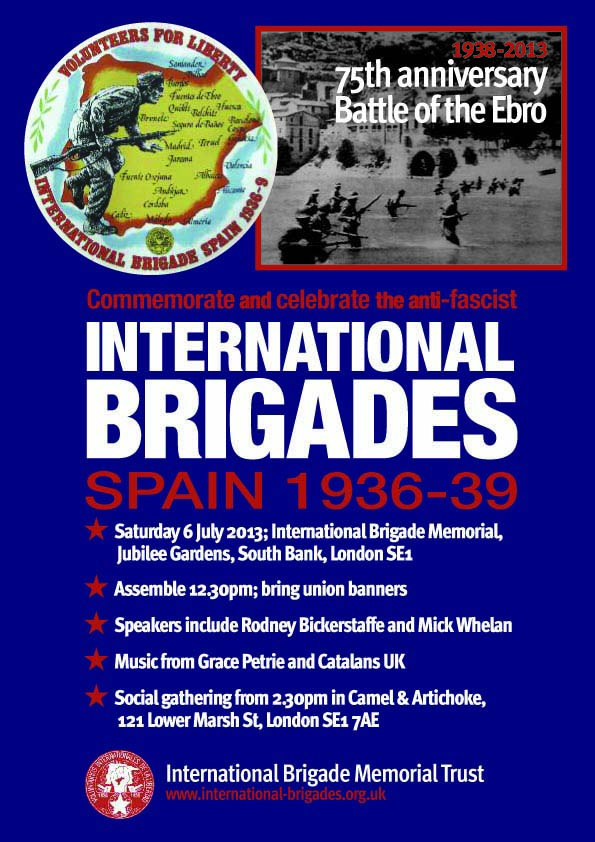 Diligence (?) submitted by the TSJM to Court No. 22 administrative litigation Madrid confirms the initial sentence of this-which declared invalid the installation of the monument to the International Brigades, and gives the UCM within ten days to confirm receipt of that judgment. Once acknowledgment sent, the Rector of the Complutense has two months to remove the monument placed outside the building of the Campus Student Complutense.

The monument was sponsored by the Friends of the International Brigades, which means Allego for funding (Complutense University, despite the lies propagated by the right wing press, has not set any background). Its design was the result of the generous contribution by a faculty committee of the Faculty of Fine Arts. The newly elected Rector of Complutense, Jose Carrillo, which opened on October 22, 2011, on the 75th anniversary of the brigades. That same day came the news that a private attorney, Miguel Garcia Jimenez, had filed an administrative appeal against this opening.

The Court No. 22 at the time decided to deny the preliminary injunction asking the lawyer consisting paralyze the installation, and thus the inauguration of the monument. But the resource processed by ordinary and issued its first ruling in April 2012, declaring “null” placement in April 2012 for lack of license and for taking the Rector “a power that does not belong” by failing to university bodies the installation.

The ruling was immediately appealed by the UCM to the TSJM. Meanwhile, it was a favorable report from the Madrid regarding the protection of archaeological and asked the City Council UCM building permit, request that despite the time lag has not been answered yet.

In January 2013 was communicated to the complainant an TSJM judgment, a judgment that has not reached the UCM until mid-May 2013, notice of which was within 10 days to the acknowledgment. This judgment confirms the initial Court No. 22 administrative litigation to declare null the installation of the monument, arguing that the actions of the UCM “is not just a procedural error in processing the license or a deficiency in the project or authorization obtained, review all questions of law, but a complete and utter failure of the procedure. “Universidad Complutense” proceeded to perform a behavior in fact, the installation of a monument in the public domain ground university, quite apart from any urban process that amparase the facility, which would tend to control their condition. “

Not know until now what will be the decision of the Rector of the UCM, although some information (see the newspaper El Mundo, June 3) Joseph Carrillo advance will not remove the monument as it was already said license for the same , remembering that some other monuments, such as the 11-M in Madrid, were opened without the previous license and had no problem.

The AABI will soon issue a statement about it, but from right now ask everyone who loves democracy and justice to express their support by writing to our address on the web, facebook or twiter.

To:
Citizens.
Do not withdraw the International Brigades Memorial at UCM
Sincerely,
[Your name]